Lanterns: The Best of Us All! Remembering Our Fallen Heroes on Memorial Day

The Best of Us All! Remembering Our Fallen Heroes on Memorial Day

The patriot's blood is the seed of freedom's tree -Thomas Campbell

1,196,554. This is the number of lives that have been given in combat to secure our freedom. All gave some.  Some gave all!  1,196,554 men and women made the ultimate sacrifice in service to our country, and on this Memorial Day, we pay respect and honor them.  Our men and women in uniform represent the best of us all!

Those of us who have never served can never fully appreciate the sacrifice given by those who wear the uniform, especially those who serve during times of war.  In fact, today most Americans live their lives with little regard to the soldiers who have paid the price for our liberty with their lives.

Imagine, these young men, some only 18 years old, writing their wills as they faced battle after battle.  I will never forget watching Band of Brothers with my dad.  In one particular episode, a young man was frozen with fear in his foxhole. Lieutenant Speirs stopped and looked at the poor soldier and said, “The only hope that you have is to accept the fact that you’re already dead.  The sooner you accept that the sooner you’ll be able to function as a soldier…”  Take a minute and let that sink in.  Most of these men and women willingly faced battle and looked death in the eye.  These heroes rushed headlong into battle knowing that the odds were against them, but were willing to die for the freedom we all currently enjoy. 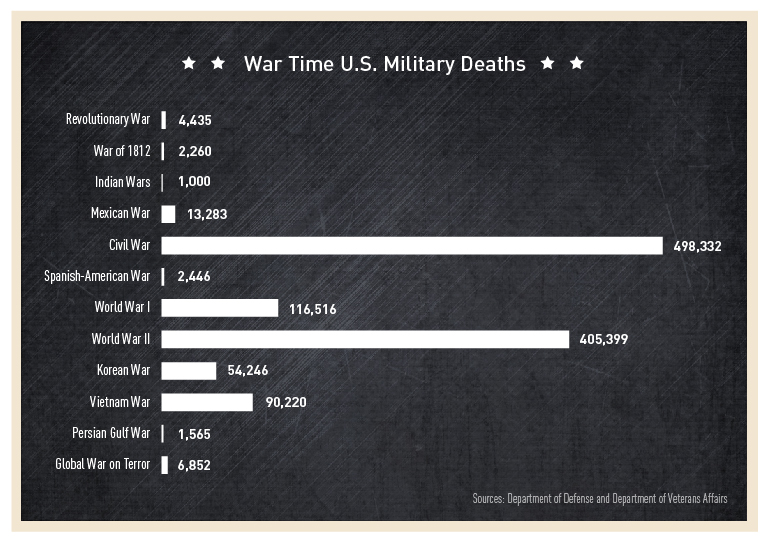 Their sacrifices have provided us with freedoms that many people take for granted.  Today, we can go to the church, synagogue, mosque, or temple to worship without fear of oppression.  We have the freedom to criticize our politicians without fear of imprisonment. Citizens have the right to “bear arms,” and every four years we have a “peaceful revolution,” because "We the People" cast our votes to choose our elected leaders.  These freedoms are made possible by those who laid down their lives.

I’m lucky that I live in a town that honors the fallen every year on Memorial Day.  There is a small Memorial Day Parade. Tombstones of those killed in war are decorated with flags, and “Taps” is played at each of the graveyards to honor those “extinguished lights.”   Finally, the honor guard fires a three-round final salute in remembrance of these heroes.  I hope that if your community has a Memorial Day celebration that you’ll take the time to get involved, and if not, be the person to organize one.  It’s a small price for us to pay, to honor those who have paid the ultimate price.

But, in a larger sense, we can not dedicate -- we can not consecrate -- we can not hallow -- this ground. The brave men, living and dead, who struggled here, have consecrated it, far above our poor power to add or detract. The world will little note, nor long remember what we say here, but it can never forget what they did here. It is for us the living, rather, to be dedicated here to the unfinished work which they who fought here have thus far so nobly advanced. It is rather for us to be here dedicated to the great task remaining before us -- that from these honored dead we take increased devotion to that cause for which they gave the last full measure of devotion -- that we here highly resolve that these dead shall not have died in vain -- that this nation, under God, shall have a new birth of freedom -- and that government of the people, by the people, for the people, shall not perish from the earth.

Many will celebrate this day with friends and family, but please remember that there are currently men and women in harm’s way, and say a prayer for their safety.  As we move forward, let’s honor our fallen heroes by holding our elected officials accountable for their actions, and pressure them to honor their commitments and uphold the Constitution and freedom these men and women paid for with their lives.

Be a Patreon of Lanterns